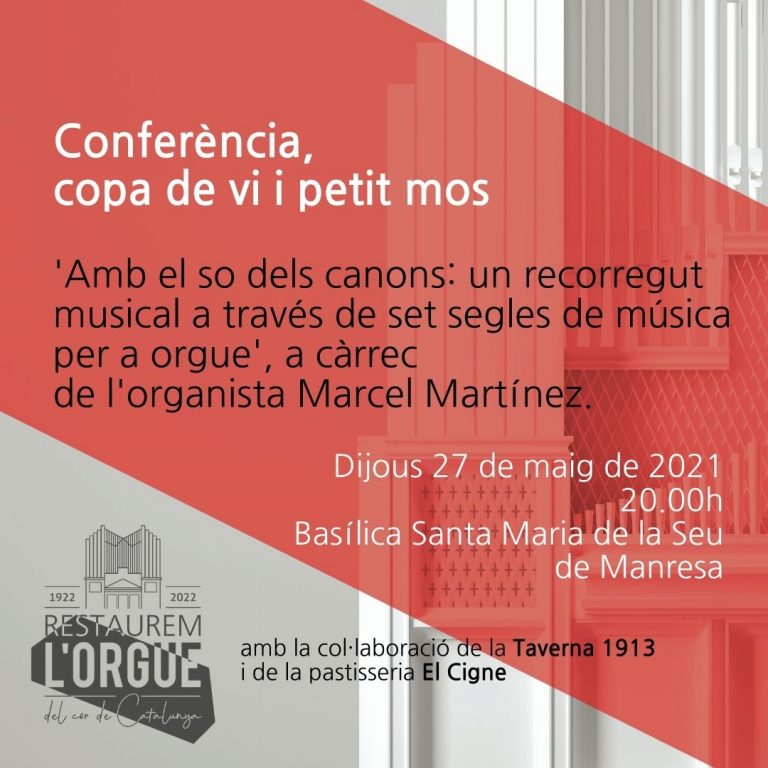 “With the sound of cannons: a musical journey through seven centuries of organ music” is the title of the conference that the organist Marcel Martínez will offer next Thursday 27th of May at 8pm as part of the campaign of restoration of the organ of the heart of Catalonia.

Although the organ was invented in Hellenistic Greece in the 3rd century BC, the journey through organ music proposed by Martínez begins in the autumn of the European Middle Ages and continues to the present day. What role did the organ play in and out of religious worship? Are there any differences between European regions, their languages ​​and different religious denominations? Thanks to a commentary by Mozart in a letter, the organ is called the “King of Instruments”. The sovereign preponderance of the organ over other instruments, however, has a much more remote origin. This is due not only to its constructive complexity, its volume, its physical presence in churrches around the world but also, and above all, thanks to its role in Christian worship over a millennium. During the talk, the audience will be able to follow a good part of the history of Western music through the organ and the music that was written for this exceptional instrument. The event will be part of the ViBa Fair and, once the talk is over, a glass of wine from the DO Pla de Bages and a small snack will be offered in the atrium of the basilica, courtesy of  Taverna 1913 and the pastry shop the El Cigne respectively. To attend the conference you must reserve a place through the booking platform on the website of the Fira ViBa, although admission will be free this system will control the capacity and facilitate the monitoring of health measures to contain the pandemic .

After studying organ and harpsichord at the Barcelona Municipal Conservatory with Maria Nacy and Maria Lluïsa Cortada, respectively, Marcel Martínez moved to Germany. There he obtained a degree in Church Music. Later, driven by scientific curiosity, he obtained a Master of Arts degree in Musicology at the University of Tübingen, where he is currently completing the writing of a doctoral thesis on Mn. Higini Anglès, patriarch of Catalan musicology. Marcel Martínez, who has lived in Germany for twelve years, combines musicological research and music dissemination with his activity as a Kantor, that is, as the musical director of a church, conducting the various choral ensembles. from 4 year-olds to young people over 80, and working as an organist for worship and concerts.

Last December 2020, the campaign ‘Let’s restore the organ of the heart of Catalonia’ was presented by a Citizens’ Commission linked to the music and culture of Manresa. The goal is to obtain funding to restore the organ located in the basilica of Manresa, which has many problems and dysfunctions due to the passage of time. The organ was dismantled and moved to the Carlos M. Álvarez Workshop last December. The proposal of the Workshop includes the total restoration and reconstruction of the instrumental part of the organ, the redistribution of its interior space, the incorporation of 10 new registers (currently it has 20) with an increase of 461 tubes (it currently has 1.437) , the individualization of the registers in its 3 bodies (pedal, major organ and recitative organ), the total renovation of the console, 2 keyboards and pedalboard with a computerized system and electronic transmission and the restoration and reconstruction of the wind system. The estimated duration of all these tasks is 14 months. The Commission will propose various events during the months of restoration of the instrument to publicize the campaign and encourage citizens to participate in this process of returning the organ to its maximum sound.

** To attend the event you must reserve a seat at: https://btiquets.com/event/vi-a-espais-emblematics-viba-2021

+info about the campaign: http://orguecorcatalunya.cat/