The basilica was built as a place of worship and even today, it is still its main function.

The life of man has had, has and always will have inevitable questions about itself. Deep questions that are not silenced no matter how much we try or ignore them: Who am I? Does my life make sense? What is the purpose of my life?

In Jesus we have found the way. He gives us the hope that fills our lives with meaning. “We are offered salvation in the sense that we have been given hope, a reliable hope, through which we can face our present: the present, even if it is a tiring present, can be lived and accepted if it leads to a goal, if we can be sure of that goal and if that goal is so great that it justifies the effort of the way “(Spe Salvi no. 1). In God, we have a hope that changes the depth of our present life.

The parish Saint Mary of Manresa is a community formed by people of all kinds united by the purpose of walking in Hope, of following the Way opened by Jesus, dead and risen. In Him we have experienced the presence of a God who loves and makes us love; a God who is given us totally free-of-charge. We are called to match his love for the ways of faith, hope and charity.

In these ways, God is filling our lives. Human beings have an infinite thirst for the absolute which can only approach their Creator.

Priest Joan Hakolimana has been the Rector of the Seu since 2017, with the aim of serving all those who need it. 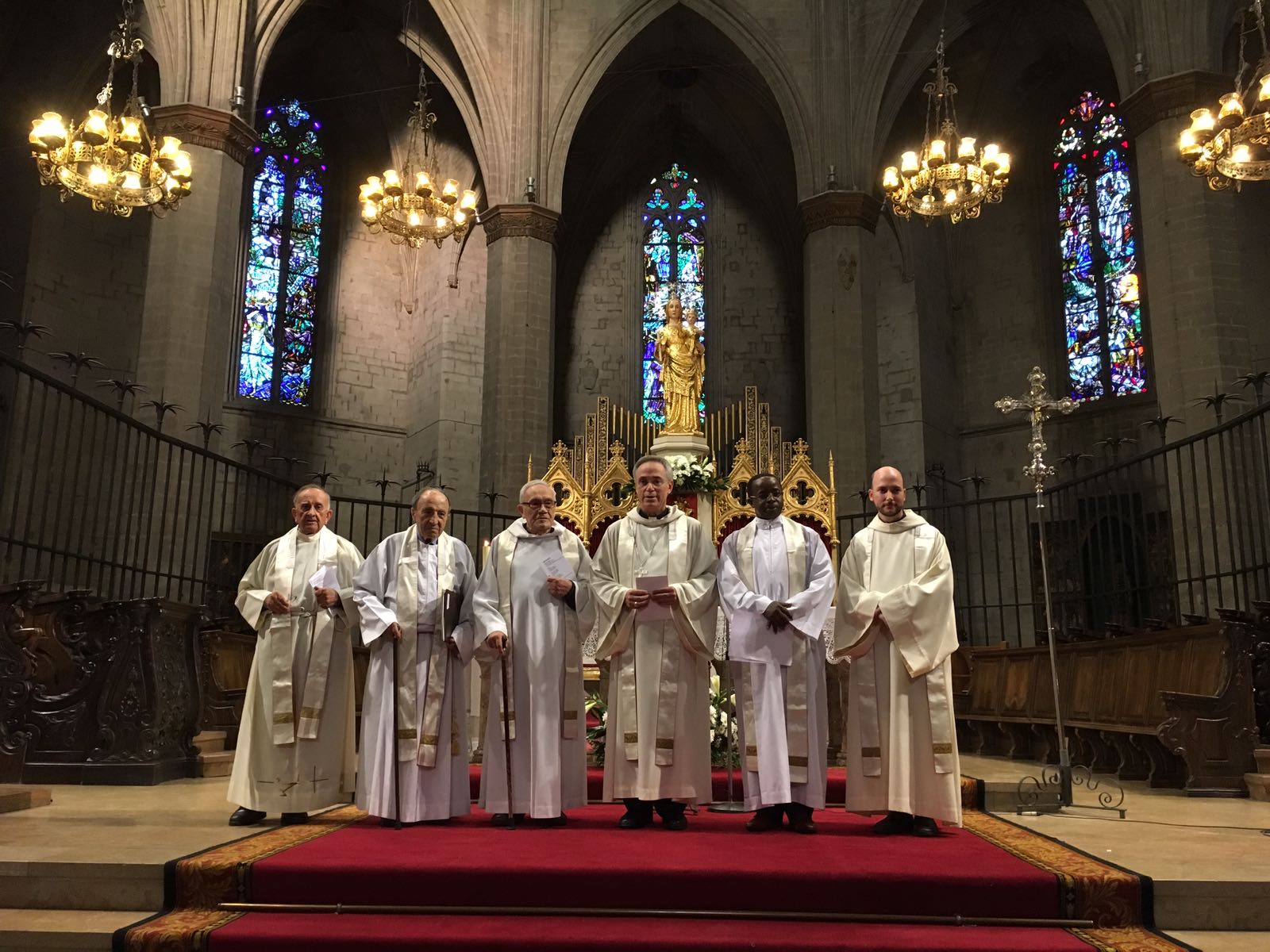 The existence of a community of clergymen in the church of Saint Mary of Manresa with the dual mission of attending the religious demands and the spiritual needs of the parishioner is very old, but it is not known when it was founded. The first documents referring to Manresa’s canons date to the first half of the 11th century. The canonical of Manresa followed the rules of the Carolingian Reformation, but it was not a regular community until the end of the 11th century. The Canons of Manresa, like those in Vic, were secular clergy and the total community living in a building did not exist. At the end of the 11th century, the reforming action of Bishop Berenguer Sunifred led to a profound change in the organization and lifestyle of the canonical Saint Mary of Manresa that began to govern, on October 30 1099, by the rules of the Rule said of St. Augustine. The old Aachen canonical was thus Augustinian canonical, as were those of Sant Joan of the Abadesses and Sant Tomàs of Riudeperes, reformed a few years earlier by the Prelate himself, or that of Santa Maria of Estany, which was a very active center of the clerical renewal of the country. The canonical community of Manresa was governed by a preposition that had the title of abbot but was known as the “paborde”. The canons were twelve and distributed the duties of prior, sacristy (responsible for worship), waiter (administrator), precentor (computer of singing), nurse and rector of St. Michael. In addition there were two domestic chaplains in charge of soul care.

On August 13 1592, Clement VIII decreed the secularization of Manresa’s canonical, making it a collegiate church dependent on the bishopric of Vic but with a certain character of a diocesan cathedral. A couple of papal documents – a copy of Clement VIII and a brief from Pope Innocent X – were required to declare that none of the qualities, jurisdictions, dignities or benefits of the suppressed canonical disappeared with their transformation into a secular collegiate church, the main dignity that corresponded to the Paborde.

Under Article 21 of the 1851 Concordate between the Holy Seu and Spain, Manresa’s Collegiate was suppressed, like all other Catalan collegiates. While the treaty was being drafted, efforts were made to preserve the Collegiate Church of Manresa in its restructuring. On August 7th 1883, the Holy Seu created four honorary canons. On December 5th 1884, a Brief Pontifical returned the title of Collegiate Church to Santa Maria of the Seu, perpetually granting “each and every one of the rights, privileges, prerogatives and pre-eminences which they enjoy or may enjoy in future churches other distinguished churches with the same title”. On that same date, the number of canons was increased to eight, in addition to the Chapter Presidency (Source: Gasol JM, La Seu de Manresa. 1978).

In 304, during the persecution of Diocletian, a group of Christians in North Africa were surprised as they celebrated Mass at a house and were arrested. During interrogation, the Roman proconsul asked them why they did this, knowing that it was absolutely forbidden, and they said,: “Without Sunday we cannot live”.

The Eucharist is the heart and summit of the life of the Church because in it Christ associates his Church and all its members with its Sacrifice of praise and thanksgiving offered to the Father once and for all in the cross (CEC 1407). Hence the name Eucharist, which means thanksgiving. It is also called Mass (sending) because the liturgy ends with the farewell and sending of the faithful (mission) to fulfill the will of God in each day’s life.

Every day at 7pm.
(in July and August this mass is cancelled)

Baptism is the foundation of all Christian life, the portico of life in the Spirit and the door that opens access to other sacraments. Through Baptism we are liberated from sin and regenerated as children of God, we become members of Christ, we are incorporated into the Church and are participants in its mission. It is called Baptism because of the central ritual in which it is realized: baptizing (in Greek baptizein) means to immerse. (CEC 1213-1214).

Baptisms are performed at the Baptistery of the Seu, a quiet and beautiful space, built for this purpose.

Timetables: Saturday from 11am to 1pm and from 4pm to 6pm (except Lent Saturdays).

It is the first experience of spiritual revelation in a state of consciousness experienced by a Catholic. Therefore, it marks the beginning of the conscious spiritual relationship between the believer and Jesus. During the ceremony, the person receives the communion (the body and blood of Jesus) for the first time and is expected to repeat this event as often as he or she wants and throughout his or her life.

Confirmation perfects baptismal grace; it is the sacrament that the Holy Spirit gives to root us more deeply in divine filiation, to draw us more firmly to Christ, to strengthen our bond with the Church, to associate ourselves more with his mission and to help us to bear witness to the Christian faith by the word accompanied by the works.

Confirmation, like Baptism, imprints in the soul of the Christian a spiritual signal or indelible character; for that reason, this sacrament can only be received once in life.

The essential rite of Confirmation is the anointing with the holy chrism on the baptized front (in the East also on other sense organs), with the imposition of the minister’s hand and the words: “Receive the sign of gift of the Holy Spirit”.

When Confirmation is celebrated separately from Baptism, its connection to Baptism is expressed by the renewal of baptismal commitments. Holding the Confirmation within the Eucharist helps underscore the unity of the sacraments of Christian initiation.

It is a sacrament by which a baptized couple commits to love, help one another, and live together. The priest is the witness of this union on behalf of the church in which two people are married.

Weddings are held on Saturday from 11am to 1pm and from 4pm to 6pm.

Monday and Tuesday from 6pm to 7pm, in the Parochial Premises of the Baixada de la Seu and in the “Convent de les Filles de Sant Josep.

– Every second Wednesday of the month, at 9.30pm. at the Parochial Premises.