The Seu of Manresa is a Catalan Gothic style basilica but Romanesque remains are preserved.

The basilica’s building follows the stylistics particular trends of the Catalan Gothic; with a three naves basilical floor plan characterized by the main nave extent that minimizes the aisles. The entire whole is closed by an heptagonal apse.

The temple façade has a big rose window in its upper part, and beneath it there is a contemporary chronological group composed by an archway corridor with an outside staircase skirted by forge works and two towers standing out aside; the north one belongs to the Holy Spirit chapel and the south one to the baptistery, which has an octagonal plan crowned by a spire. In the north side there is a 50m height square bell-tower with two large windows in two levels, a clock and balustrade bound at the top. 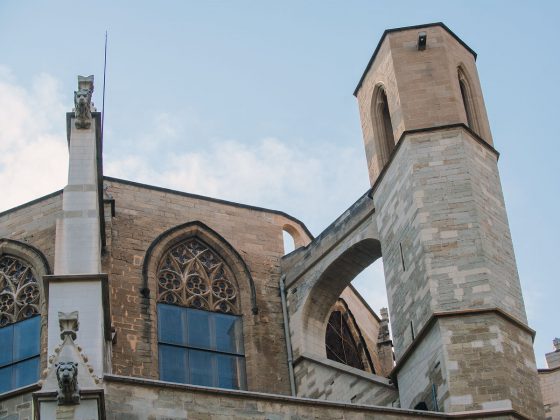 In the 30th of June 1322 Berenguer de Montagut signed the contract of the temple building. He planned the project and directed the first stage of the works after the laying of the foundation stone in 1328. Montagut had already built in Manresa the Pont Nou bridge, and lately he was going to execute at the same time the Seu and Carme’s church projects. Bartomeu Ladernosa followed him directing the works around 1353-1357 and in 1396 Arnau de Vellers and Pere Armengou followed.

Since the end of the 15th century the master Martí d’Ibar, the French Arnau de la Blatte and Esteve Brueil and the Andalusian master Alonso de Baena appear quoted in some documents. In the 16th century the masters Joan Font and Guerau Cantarell built the tower. In the 20th century, Alexandre Soler i March projected and directed part of the façade with a Neo-Gothic gallery composed by three doors and upper roof, located between the already existing Holy Spirit’s chapel and the new baptistery with the help of a very important architect: Antoni Gaudí.

Other works by Berenguer de Montagut

In the city of Manresa Berenguer de Montagut also built the Pont Nou bridge, commissioned in 1318, an interesting work of engineering and one of the largest viaducts of Catalonia; also the Carme church, which was commissioned one day before the Seu and which was destroyed during the Spanish Civil War.

Abroad from Manresa and with Bernat Despuig, he projected the Santa Maria del Mar basilica in Barcelona and the project of the Palma de Mallorca cathedral. Lledó’s Mother of God sanctuary, in Valls, the town where he might be native from might also be a work by Berenguer de Montagut.