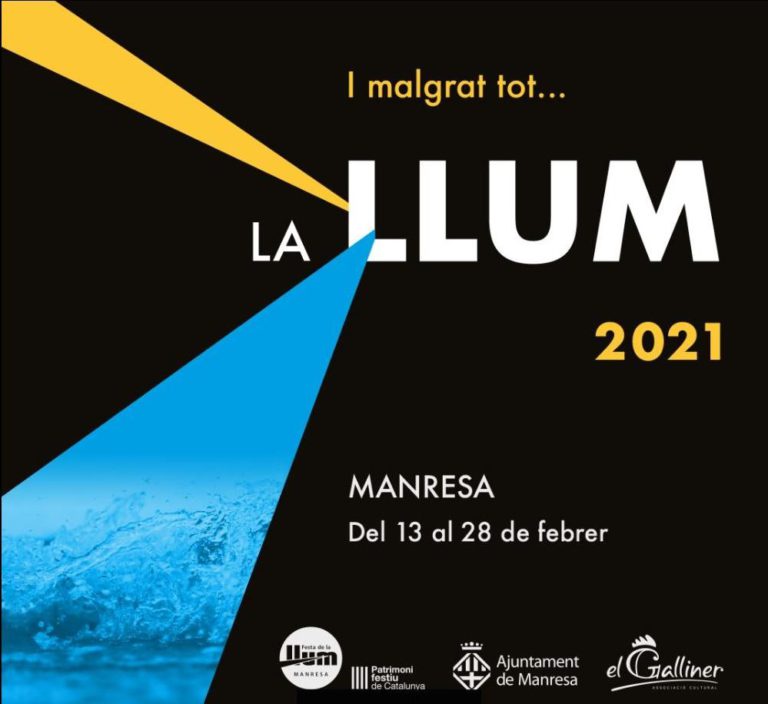 From the 13th to the 28th of February, the city will experience a different Light due to the Covid-19 pandemic.

The first big change in relation to previous editions is that its name will only be “La Llum” (The Light) instead of “Festa de la Llum” (The Light’s Festivity”). Secondly, the Fira de l’Aixada (Medieval Fair) is canceled and the Transèquia can be held during the whole month of March in bubble groups.

The big events that will take place are the Jardins de Llum (Light Gardens) and the Encesa de la Nova Llum, (Lightning of the New Light) which incorporate new features, such as a children’s talk (this year online) and the institutional speech by Valentí Oviedo, cultural manager and director of the Gran Teatre del Liceu (Liceu’s Great Theatre, Barcelona).

Jardins de Llum will be on the 20th and 21st of February from 6.30pm to 9.30pm in several places of the city, including the Gothic Room of the Seu of Manresa.  Jardins de Llum is an ephemeral art itinerary around Light and Water organized by Manresa City Council, CACIS The Lime Furnace and the TAVCC.

In parallel to the Jardins de Llum, in the Cardener river area, the artist Marc Sellarès Cots will light the “Epicenter” installation, which will be accompanied by a drone flight by Flock Drone Art. The show can be seen from the Cova de Sant Ignasi (Saint Ignatius Cave), Park of the Seu, Reforma’s Square and other parts of the city with views of the Santa Caterina’s Tower.

On Saturday February 20th, the Lighting of the New Light will also take place in the Espai Plana de l’Om, organized by Òmnium Bages-Moianès and with the collaboration of Cultura del Bé Comú. The Lightning will project a battery of audiovisual capsules that show the expression of people facing the norm.

El Galliner is this year’s administrative entity of The Light and proposes the “Manresa Theaters and Cinemas” project, which will provide extensive documentation of the city’s theaters and cinemas since the mid-19th century. The Galliner has made a public call to recover images, posters, programs and testimonies around the subject. As a result of this collection, various activities will emerge.

The Light commemorates the Mystery of the Light, produced on February 21st of 1345, when a ray of light from the Monastery of Montserrat entered Carme’s Church of Manresa. At that time, it was considered a divine sign that allowed the construction of Sèquia’s Channel and the signing of the concord between the bishop of Vic and the city.

You can check out the full 2021 Light program here.