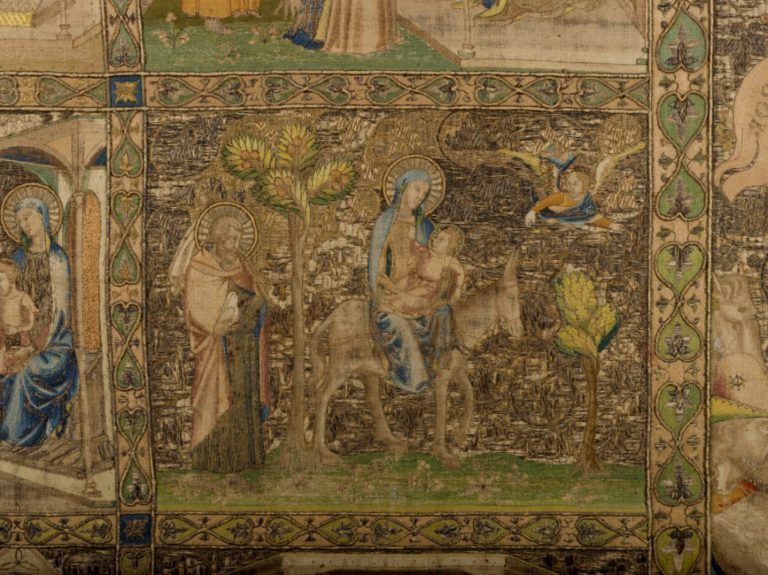 The restoration and relocation inside the Basilica of the Gothic altar frontal known as the “Florentine Front” of the 14th century will be a fact in the coming months.

This project has been selected to be part of “Temps de Gòtic” (“Gothic Time”), an ambitious program of interventions in movable and immovable cultural heritage of the Gothic period, the result of an agreement signed between the Department of Culture of the Generalitat de Catalunya and La Caixa Foundation.

The project includes the cleaning and comprehensive restoration of the front and the creation of an exhibition space in one of the side chapels of Manresa’s basilica that is in line with both the liturgical character of the building and the environmental needs of the piece.

These interventions will be carried out by the country’s top specialists in each of the fields of action. An inter-institutional and professional work team will soon be set up to begin concretizing and executing the various initiatives that make up the project, which has been awarded a budget of € 125,000.

In this way, it will be possible to fulfill the will of the Seu to have the front in the desired conditions of conservation, to give it the maximum of visibility and prominence and to return it to its essential liturgical character. The transfer of the front to the interior of the Basilica will help to further enhance the extraordinary heritage complex of the Gothic period formed by the magnificent church designed by the architect Berenguer de Montagut and the different altarpieces of the same artistic period, between those that stand out are the Altarpiece of the Holy Spirit (1394) by Pere Serra.

The parish community, the Friends of the Seu and the management team of the basilica will make every effort to make this project a reality in 2022, the date on which the 700th anniversary of the signing of the architect’s contract will be celebrated.

The “Passion Front”, popularly known as the “Florentine Front” is a Gothic altar front commissioned by Ramon Saera, one of the most important personalities of Manresa in the 14th century, to the Florentine embroiderer Geri di Lapo. In his will (made on November 24, 1357 and preserved in the Archives of the Regional Museum), Saera bequeathed the front to the Basilica of Manresa.

In the 14th century, the fronts served as an ornament for the high altars because, unlike the side chapels, altarpieces could not be placed there. It is a piece of great artistic importance worldwide as it is one of the few preserved Gothic altar fronts of the time.

The piece is 90cm high and 333 cm wide. In the central part the Crucifixion is represented and the two lateral parts are divided into nine registers arranged three by three in three rows.

On December the 20th of 2017, the Seu of Manresa commissioned a study from the Center for the Restoration of Movable Property of the Generalitat de Catalunya to assess the state of conservation of the Florentine Front and improve its conservation and exposure. The work is currently in the Historical Museum of the Cathedral and can only be seen on demand, as the space is not part of the tour of the basilica.