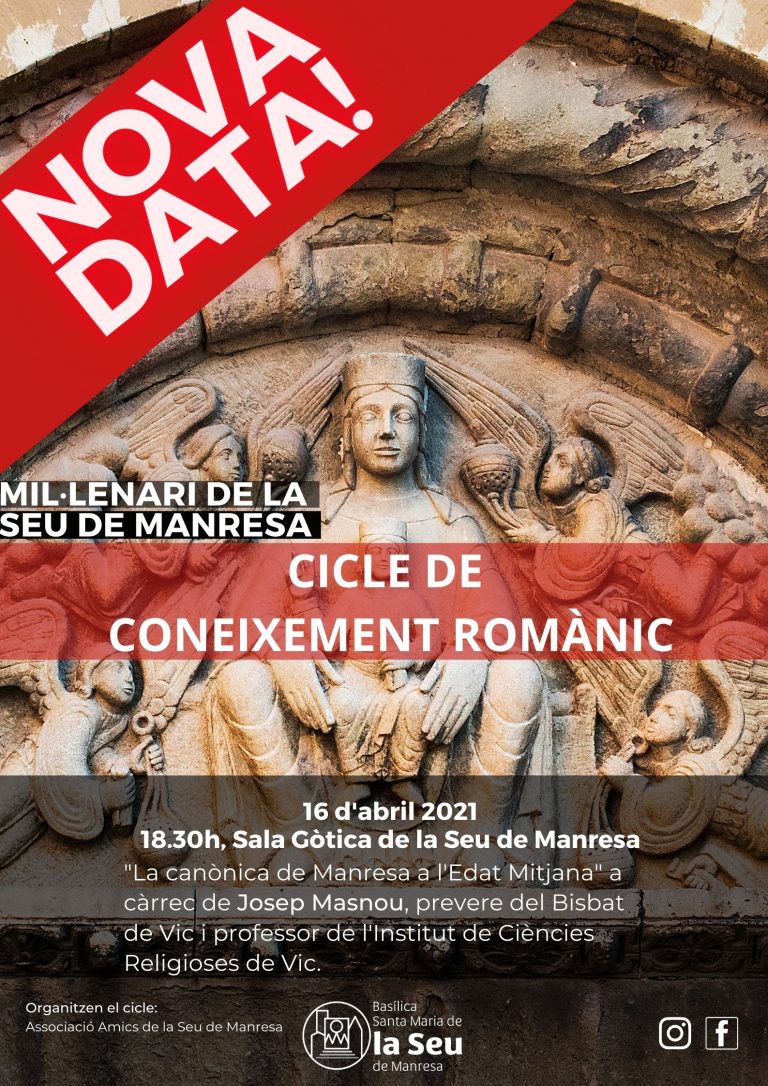 The Basilica of Santa Maria de la Seu of Manresa with the collaboration of the Friends of the Seu, reschedules the conference “The canonry of Manresa in the Middle Ages” by Josep M. Masnou on Friday 16th of April 2021 at 6.30pm. This is the last of the three conferences of the “Cycle of Romanesque knowledge” that were held in 2020 on the occasion of the celebration of the Millennium of the redemption of the Cathedral.

The “Cycle of Romanesque knowledge” consists of three presentations by eminences in the field of history and aims to deepen into the knowledge of the Romanesque and to contextualize both the church of Santa Maria and the city of Manresa. The first two conferences could be held according to schedule, but Josep M. Masnou’s  was postponed due to restrictions adopted to contain the Covid-19 pandemic.

The first presentation of the cycle was “Manresa and its county. From the arrival of the Carolingian power to the endowment of the year 1020 ”by Xavier Costa, Doctor in Medieval Cultures and graduated in History. Costa is a Professor at the Higher Institute of Religious Sciences of Vic and is a collaborator in various University research projects. His main field of research is the Catalan counties in the High Middle Ages and, above all, the many religious institutions that were founded there.

Anna Orriols presented “Romanesque Manresa” two weeks later. Orriols is a Doctor in Art History and a Professor of Medieval Art History at the Autonomous University of Barcelona. Among many others, she is the author of the book “The Seu of Manresa” (Farell Editors, 2006) and in 2018 she participated as a speaker in the training of the basilica.

Half a year later than planned, the basilica can re-program “The canonry of Manresa in the Middle Ages” by Josep M. Masnou, presbyter of the diocese of Vic, historian, archivist and professor at the Institut Superior de Religious Sciences of Vic. Masnou is currently completing a doctoral thesis on Vic’s Cathedral in the Middle Ages. In his talk at the Seu of Manresa he will explain what a monastery was like in a growing city in the 14th century and how it led to the construction of a large Gothic basilica as a collective project.

The conference will take place in the Gothic Room of the Seul on Friday 16th of April at 6.30 pm, following all the sanitary measures to guarantee the safety of the attendees and the workers and collaborators of the basilica.

To attend the event, it is essential to make a reservation in advance at: gestio@seudemanresa.cat or 938721512.

The Millenium of the redotation

In July 2020, the Seu presented the program of  the celebration of its Millennium, which in 1020 re-established the possessions of the church and redefined the limits of the city. .

On July 15, Doctor Marc Sureda read the paper “A thousand years of a Dam: Oliba and Manresa”. Next, the so-called “Espai Oliba” was inaugurated in the lower cloister of the basilica. Now, the space is part of the visiting itinerary.

In July, there were 5 sessions of the “Millennial Evenings”, guided tours to explain the Romanesque origins of the basilica and to introduce the “Espai Oliba” to all visitors.

On the 3rd, 4th and 5th of September, the 4th Cop d’Ull Microtheater Festival was held in the Seu. It was a very different way to discover the history of the basilica through microtheater works written especially for the occasion.