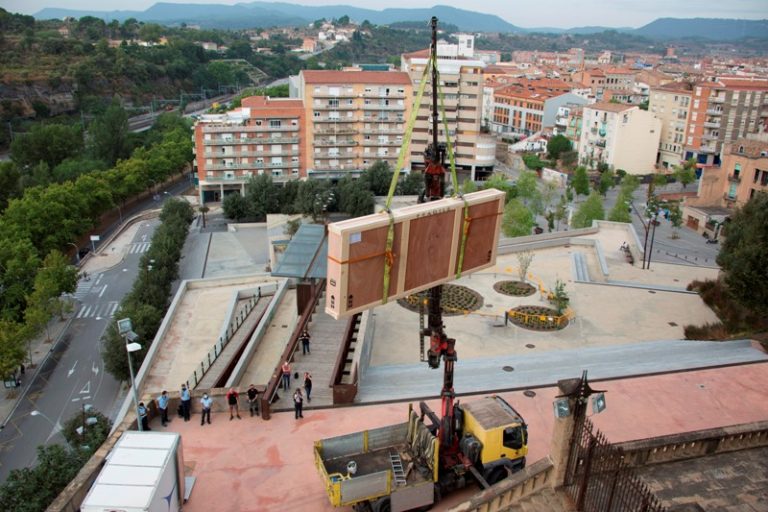 The restoration of the Florentine Front begins

Today, 9th of September, the Gothic front of the Passion of the Basilica popularly known as “Florentine Front” (Geri di Lapo, XIV) has been transferred to the Center for Restoration of Movable Property of Catalonia (CRMBC) where it will be restored.

The restoration and relocation project of the Florentine Front is carried out within the project “Gothic Time” program promoted by the Department of Culture of the Generalitat de Catalunya and “La Caixa” Foundation. The budget granted to the Bishopric of Vic for all interventions is € 125,000.

A team of professionals specialized in the transfer of works of art has been responsible for extracting the altar front from the Historical Museum of the temple through one of the balconies located on the main facade and with the help of an elevator. The work has been moved from its usual exhibition spot and inside its showcase in a perfect operation.

The conservation and restoration process that will be carried out by a company specialized in the restoration of fabrics, has a planned duration of 7 months and includes the treatment of surface and mechanical cleaning of the work, the correction of deformations, the consolidation of damaged parts and fastening of loose threads, the protection of the reverse and the presentation of the piece in its frame.

An inter-institutional and professional team formed by members of the Architectural Heritage Service of the General Directorate of Cultural Heritage, the Center for the Restoration of Movable Property of Catalonia, the Bishopric of Vic and the Basilica of Santa Maria de la Seu of Manresa is responsible for the planning of the whole process. The aim is to present the restored work in 2022, year of the celebration of the 700th anniversary of the signing of the contract to build the Gothic Basilica.

Once all these tasks have been carried out, the Frontal will return to the Seu of Manresa with a renewed location: the chapel of the Virgin of Lourdes, which will be enabled as a new exhibition spot. The choice of this location is due to the fact that it meets the necessary requirements so that the fabric can be exposed guaranteeing its optimal conservation. The front will be located in a display case specially designed and produced for the purpose.

The “Front of the Passion”, popularly known as the “Florentine Front” is a capital piece of Gothic worldwide. In 1357 Ramon Saera, one of the most important personalities of Manresa in the 14th century, bequeathed it to the Basilica of Santa Maria de la Seu of Manresa, as stated in his will.

The work can be technically called “needle painting” and is made of polychrome silks, gold and silver threads on a fabric where the design is painted.

The piece is 90 cm high and 333 cm wide. In the central part the Crucifixion is represented and the two lateral parts are divided in nine registers arranged of three in three in three rows. On the left are represented the Spouses of Mary, the Annunciation, the Visitation, the Birth of Jesus, the Adoration of the Three Wise Men, the Escape into Egypt, the Presentation in the Temple, Jesus among the Doctors and the Expulsion from the Temple. On the right side we find the Entry of Jesus into Jerusalem, the Holy Supper, the Prayer in the Garden, The Kiss of Judas, Jesus before Caiaphas, the Scourging, the Calvary, the Resurrection and the Descent into Hell.

The location of the Frontal has changed over the years: in 1888 it went to the Universal Exposition in Barcelona and then became part of the collection of the Episcopal Museum of Vic. In 1901 it returned to Manresa for the Manresa General Exhibition. In 1929 it was exhibited at the Barcelona International Exhibition. During the Spanish Civil War, the Committee for the Defense of the Artistic Heritage hid it in the Cave of Manresa and in 1938 in Dardius. Finally and to this day, the work has been exhibited in the Historical Museum of the Seu, located in a gallery at the top of the atrium of the temple in a wooden display case.

On December the 20th 2017, the Basilica of Manresa commissioned a study from the Center for the Restoration of Movable Property of the Generalitat de Catalunya (CRBMC)  to assess the state of conservation of the Frontal. The diagnosis highlighted the fragility of the work as it has deformations, wax stains (due to its use in liturgical services), oxidation of threads, cracks and loss of embroidery among many other observations that alter the stability. From today on, all these imperfections will be corrected with the conservation-restoration intervention that has already begun at the Center for the Restoration of Movable Property of Catalonia (CRBMC) and, in parallel, the chapel chosen to display this artistic and heritage gem will be adapted.