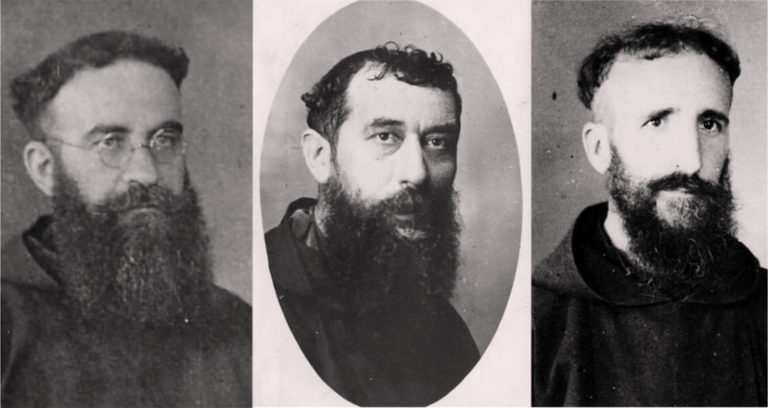 Beatification of three Capuchin martyrs at the basilica

The Vatican Secretary of State has announced that Friars Benet of Santa Coloma de Gramenet, Domingo of Sant Pere from Riudebitlles and Josep Oriol from Barcelona will be beatified on November 14th 2020 in the basilica Santa Maria of the Seu of Manresa. Bishop Angelo Becciu, Cardinal Prefect of the Congregation for the Causes of Saints will preside the beatification mass.

The beatification of the three Capuchin martyrs killed in Manresa in 1936 is the first of modern times in the Bishopric of Vic, since Pope Benedict XVI moved the beatification ceremonies in the dioceses of the beatified (and not in Rome) to bring his testimony to the local church.

The process of beatification of these Capuchins began in the diocese of Vic on April 18th 1955: it was sent to Rome in 1962 and was continued and completed between 1997 and 2005. Finally, on January 24th, Pope Francis approved in a manner the beatification is official and the details of the celebration have now been revealed.

Fray Benet is the religious name of Josep Domènech Bonet, born in Santa Coloma de Gramenet in 1892. Founder of the “Friends of Gregorian chant” and master of novices in Manresa. He was a modelic cappuccino, with an ascetic character, and an example of consecrated life who knew how to demand of his novices their spiritual progress. He was arrested on August 6th 1936 by militiamen who tortured and murdered him on August 7th 1936.

Fray Domènec de Sant Pere de Riudebitlles is the religious name of Juan Romeo y Canadell, born in Sant Pere de Riudebitlles in 1882. In 1917 he was sent to Central America where for 17 years he worked pastorally in Cartago (Costa Rica) and Managua (Nicaragua ). After a very intense apostolate, in 1930 he returned to Catalonia sick and lived the last stage of his life in the convent of Manresa. He was identified and detained and was killed on July 27, 1936.

Fray Josep Oriol de Barcelona is the religious name of Jaume Barjau Martín, born in Barcelona in 1891. Father Josep Oriol was ordained a priest in 1915 and dedicated himself to preaching, attending to the confessional, spiritual direction and historical research. He prepared the edition of the Chorale Psalterium, a monumental work that received praise from Pope Pius XI. Father Oriol and Rev. Pere Vintró were the first ones killed in Manresa due to their religious condition on July 24th 1936. Father Oriol had found refuge in a house next to the convent, secretly celebrated Holy Mass and visited and clandestinely administered the sacraments. It was on one of these exits that he was discovered and arrested. After demonstrating religiously, he was insulted and flogged while he forgave his executioners. He was finally killed.F

The Seu reopens the Archive